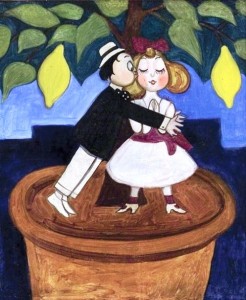 Look who’s here to share an excerpt from her delicious romance Following His Heart:  Donna Fasano, a USA Today bestselling author whose award-winning books have been translated into nearly 2 dozen languages and have sold 4 million copies worldwide. 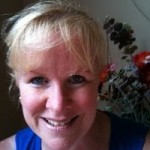 Sara Carson is a 30-something widow with a busy life. Two fun-loving best friends, a caring mom who needs her, and a thriving sweet shop. What more could a woman want? But when the ancient plumbing in her shop springs a leak and a gorgeous, dark-eyed stranger rushes to her rescue, hilarity unfolds–and Sara quickly sees exactly what she’s been missing.

Something most peculiar draws Landon Richards to Ocean City, Maryland–and to the lovely Sara. This woman touches his heart like no other, and the two of them explore the heady attraction that pulses between them. But haunting dreams have a way of encroaching on reality, and the strange phenomenon that brings these two together will also threaten to tear them apart.

This is the first book in the Ocean City Boardwalk Series, where life for three enterprising women, Sara, Heather, and Cathy, isn’t just fun in the sun–love is waiting on those sandy shores! 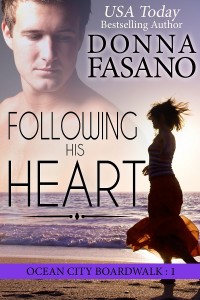 Excerpt from FOLLOWING HIS HEART

“Landon, I can do things with buttercream frosting that would blow your mind.”

A couple of things happened simultaneously; she realized there had been a couple of heartbeats of swollen silence before he responded, and she replayed the words she’d just spoken in her head. She blanched and her hands went still. Then her lips parted, but no words came out. She set down the bag of icing and the cupcake on the stainless steel counter and tried to smile, but failed.

She blinked and gazed into his eyes, saw the desire smoldering there.

“That came out sounding much more, um…” She searched the air for a proper word, licking her lips and drawing her brows together. “Eh, ah, inappropriate than I intended.”

One corner of his mouth tipped upward. “I think it sounded perfectly appropriate, Sara.”

The air left her lungs at the sound of her name. How did he do that? Say her name so softly, yet make it sound so rich, and resonant, and full of emotion?

The oddest feeling churned in her chest, a heated giddiness that made it difficult for her to draw breath. Her arms felt shaky, and she set the cupcake on the counter so she could clutch the cold, rounded metal edging. She needed the support, and besides that she hoped to hide the tremble of her hands.

He was attracted to her. Wanted her. She’d have had to be stone-cold unconscious not to recognize it.

Before meeting Landon, she hadn’t thought about touching or being touched in a sexual way for a long, long time. She’d have thought desire was something she’d completely forgotten how to feel. But the human body was an amazing machine. Adrenalin surged and hormones coursed as a hot, greedy need thudded through her. Even as she stood at the island with at least three feet of space between them, she could feel herself being drawn to him like opposite poles of a magnet. The attraction was powerful. Too strong to be denied.

How they came together was anyone’s guess. Had she moved toward him, he toward her? Or had they converged simultaneously? Sara couldn’t be sure.

When she lifted her hands to place them on his chest, she noticed a smear of frosting on the side of her index finger, and she made to pull away so she could wipe her hand on her apron. But Landon captured her wrist and guided her finger to his lips. He slowly ran his tongue along her skin, the wet heat forced her breath to snag in her throat. Then he closed his lips around the pad of her finger and sucked gently.

“Mmmmm.” The low, husky sound reverberated from deep in his chest. “Delicious.”

“Come on now,” she whispered, sensual teasing in the words as she nuzzled his chin with the tip of her nose and then a light touch of her lips, “don’t you think you should share?”

His arms wrapped around her and he kissed her languidly, once, twice, three times, and then he covered her mouth with his, delving his tongue into the soft and willing recesses.

She closed her eyes and reveled in the luscious taste of sugar and butter and vanilla and him. Without thought, she leaned into him, drawing back her shoulders just a little and pressing her breasts into his chest. Oh, to be naked and feel the heat of his bare skin against hers; that would be wonderful. The desire urging her on was all-consuming; she didn’t have time to think about her actions, or to feel embarrassed by her bold behavior. She wanted to taste more of his kisses, she yearned to feel his hands on her body, she hungered for more… so much more.

WHEW!!! Cold shower, anyone? 😉 Don’t miss this one by my super talented friend!