It’s October, Book Girls. We all know what that means: 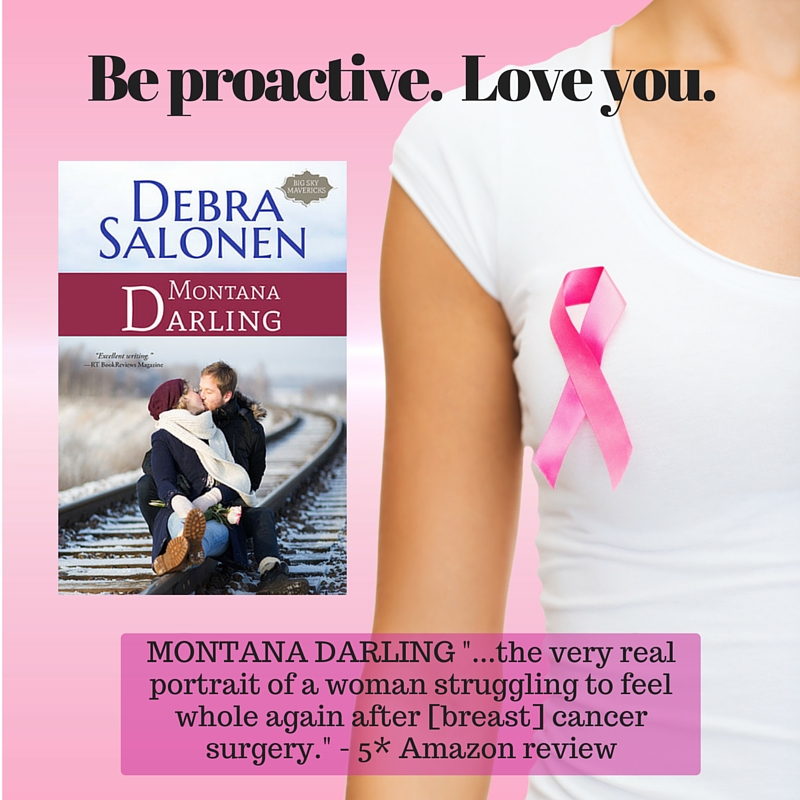 I’ve only written one book with a breast cancer surviver heroine, but Mia Zabrinski is one of my favorites. Heroic, stoic, determined to do the right for her children and herself–alone, if she must. And she certainly doesn’t expect to find someone who thinks she’s perfect. But a real hero loves with his whole heart–even if it’s battered and bruised from losses of his own. 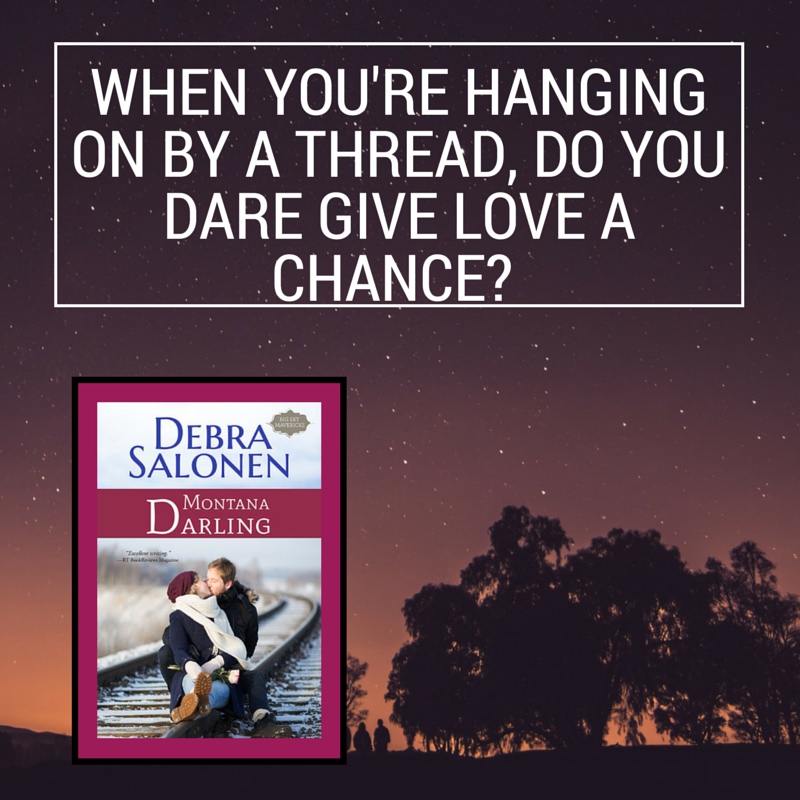 He handed her one of the paper cups. “These should be cooled just enough. I come here once a week with my cocoa.”

She snapped off the lid and lifted the rim to her lips. The lush warm smell made her taste buds gush. Her hand trembled a bit. Cocoa was made with sugar. Sugar fed cancer cells… Stop, a voice in her mind ordered. Her mother’s voice. Just enjoy for once.

She took a sip. “Mmm,” she murmured, the cup’s rim still touching her bottom lip.

She closed her eyes and drank more–a long, satisfying gulp of warm joy.

She heard a clicking sound and looked at Ryker, who had his camera to his eye. “Sorry,” he said, still clicking. “The purity of satisfaction on your face was too perfect to pass up. Sage would pay me big bucks to let her use this image in her advertising.”

His grin was so self-satisfied and unapologetic she wanted to yank the camera out of his hands, but in a way he reminded her of Hunter, who used to be that confident of his gifts, that happy when something he drew or made from a tub of Legos turned out. That was before he escaped into video games to avoid having to deal with his imploding family. She missed that look so much she could cry.

Ryker distracted her, though, with a throaty, masculine chortle. “I almost forgot your test.”

“What kind of test?”

“You’ll see.” He stretched out his arms, fingers linked, like some kind of warm-up. The sunlight created something freakishly like glitter highlights in his mop of curls. The guy was handsome enough to be in a freakin’ TV commercial, she thought. He had the kind of face you couldn’t help liking and trusting. Hello, Ma’am. Might I interest you in something delicious but so bad for your body you may as well just throw in the towel? Trust me, you’ll love it.

He set his camera aside and scooted forward. His butt must barely be touching the iron rail, she thought, resisting the urge to look. She hadn’t had sex–or even thought about sex–for so long she’d begun to wonder if her surgeon removed her libido along with all her other body parts. Most days she felt like a neutered cat, but, suddenly, seeing a handsome younger man balancing on the balls of his feet in a full squat while tempting her with some special, sinful treat, resonated with her inner cougar.

He unrolled the crimped bag, then reached inside with his long, beautiful fingers.

Who notices a man’s fingers, for God’s sake? she thought.

“Again? I don’t think so. Standing on Main Street with people around was one thing, but you could have an ax in your backpack for all I know.”

His roar of laughter triggered a funny lightening inside her. She hadn’t laughed in too long. At what point had she turned hard and dry and humorless? No wonder her kids hated her.

Tears pricked behind her lids. She set her cup on one of the rails and leaned forward, too. Motioning for him to get on with what he had planned. “Just do it.”

He didn’t respond right away.

Nervous, she licked her lips. “Come on. I don’t have all day.”

She swallowed first, the noise loud in her ears. Could he read her nervousness? She felt a blush creep into her cheeks.

Something small and soft was deposited carefully on her tongue. She closed her mouth and tasted. Flavors exploded so vividly she couldn’t quite register every aspect. The contrast of savory and sweet, smooth and chunky confused her brain’s identification centers. “Am I supposed to tell you what this is?” she said as well as she could manage without her saliva glands tripping her up.

She kept her eyes closed so she could concentrate. “Caramel.”

It wasn’t a question.

For some reason, he groaned and muttered, “Really?”

“I’m pretty sure the tiny bit of crunch was sea salt.”

“Correct.” His tone was that of a teacher who expected her to fail.

She swished her tongue around, testing for the missing flavor. “Chili. Habanero, to be exact.”

She opened her eyes and looked at him. His wicked grin told her she’d gotten it wrong. “Close. Well, technically, I’d have given it to you if you’d left it at pepper. But Sage calls these Kick Starters. She’s been beta testing them for a week and finally settled on chipotle.”

The instant he said the word she tasted the lingering hint of smoke that had been masked by the rich warmth of the chocolate.

Their gazes met and held.

His eyes intrigued her, challenged her to go deeper and find out more about him. A foolish waste of time. The guy lived in a stupid tent. Winter was coming. He wouldn’t be sticking around for long. He was leaving. Not soon enough for her to get her basement dug, but soon.

A fact, which, a voice in her head reasoned, made him perfect for a rebound fling.

Once the word “fling” lodged in her brain she couldn’t unthink it. She’d been with two men in her life. First, her high school boyfriend who moved away their senior year and lasted about three letters and half a dozen phone calls before he broke up with her, and then she’d made the mistake of falling head over heels for her twin brother’s college roommate and best friend, Edward. Her college lover. Her husband. The narcissistic dilettante who abandoned her when she needed him most.

Mia didn’t like it when people–especially strangers–invaded her space. Ryker’s face was closer than she normally tolerated, but she didn’t pull back. She couldn’t. His gaze seemed to look past the superficial aspects of her hair, her face, her features, to see into the depths of her soul to the damaged, brittle woman terrified to re-engage with life.

The last thing she needed was a man. A man who wanted something from her.

He wants my land, the lawyer in her thought.

He wants my body, the woman in her thought.

No. He only thinks he does.

“That must have sucked.”

“It wasn’t the high point of my life. But I’m on the road to recovery. All my tests have come back clear. I caught it early and wiped it out at the source.”

She shifted her shoulders unconsciously feeling the dull reminder of the implants.

“You’ll feel more like yourself if you don’t have to lug around prosthetics,” Mom had coaxed.

“I don’t plan to wear falsies, Mom. I’ll be flat chested for the rest of my life. Lots of women are.”

“You won’t be happy with that, Mia,” Doctor Sharsmith had insisted. “Your clothes won’t fit right. Your femininity will take a serious hit. I’ve had patients who chose that route, but within six months they changed their minds. Breasts are a part of your body image, Mia. Let me give you back your natural curves.”

So, she’d agreed to more surgeries. More risks. More fear that she might not wake up from the anesthesia, and her poor children would be left in the care of their irresponsible and morally challenged father.

Now, she was outwardly normal–or some vague semblance of normal. She was skinny. Weak. Vulnerable to germs. Terrified of carcinogens, sugar, processed foods, and artificial dyes. She hated looking at herself in the mirror, and the question had crossed her mind lately whether or not any man would ever desire her?

If she wasn’t totally mistaken, this man found her attractive. Or thought he did.

Maybe this is a distraction to game me into giving up my land.

Members of the Big Sky Mavericks never gave up.

Suddenly feeling more like her old self than she had in months, she leaned in and kissed him. Three…four…seconds of heart-stopping strangeness. His lips solidly touching hers. No tongue or heavy breathing, just a tingling caused no doubt by the “mones,” as her future sister-in-law called the little buggers.

She jerked back. “Cake.”

“No, thanks. But I wouldn’t mind another kiss.”

Mia’s a fighter, a survivor and a mom. If you need a bit of inspiration before you head to your annual mammogram… 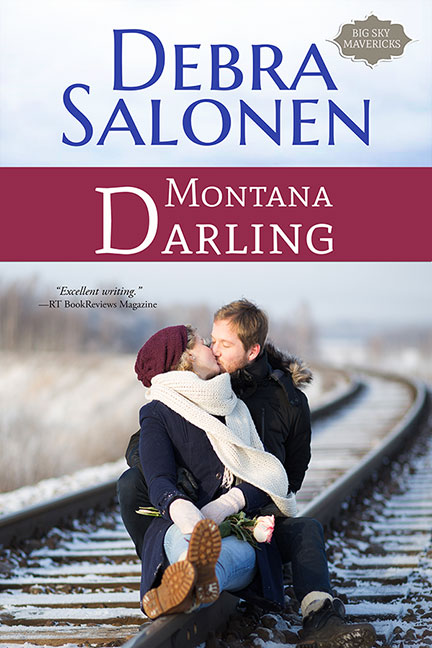 PS: you can get more insights into this couple’s HEA in MONTANA MAVERICK and MONTANA MIRACLE