Here’s a quick video look back in the rearview mirror.

We have a tentative “flash” for my Property Sisters of Montana series. (A “flash” is what they call the recognizable “logo” that you see on each cover to signify its part of a series.) The amazing and creative Tule Publishing team is working on the covers as we speak. I really love this flash and wanted to share it with you.

I say a nightly prayer to the Cover Gods that my Property Sisters covers will be knock-your-socks-off gorgeous. (But I’d also be happy with: must-grab-and-read-this-book). 😉

HER REBEL TO KISS 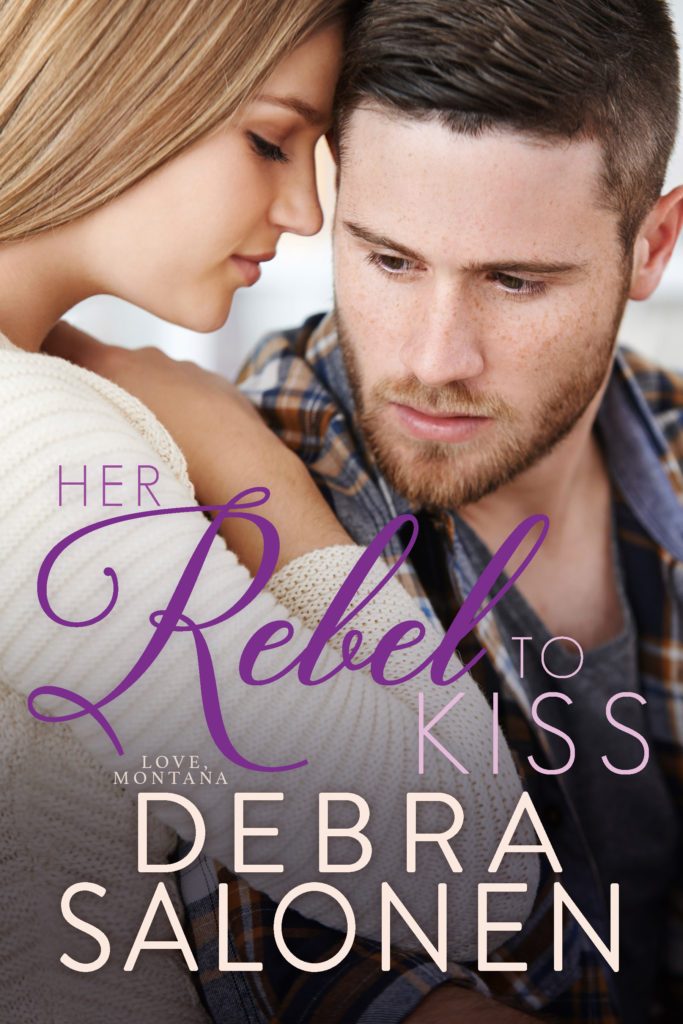 Don’t look down and don’t give up.

Justin Oberman‘s credo for living his adventurous–some might say death-defying–life to the max served him well until the unfortunate outcome of a climb made him walk away from the sport he loved. A lucrative new job offer could pave the way to a more traditional life in Marietta, Montana, where his two best friends have fallen in love with the women of their dreams. But settling down always seemed more daunting than Everest and not worth considering until a mysterious lady in red walks into his life on New Year’s Eve. Suddenly, that happily-ever-after stuff Flynn and Tucker have been raving about looks within reach.

The first fall is always the hardest.

Nikki Magnesson Richards has loved Justin Oberman most of her life. First, from the safety of her brothers’ old tree house. Later, with unrequited teen-age angst. Her poorly thought out attempt to get him to notice her cost them both dearly. Now, a dozen years later, her fairy godfather boss has orchestrated the most romantic meeting possible–the Big Sky Mavericks Masked Ball for Charity. A kiss at midnight with her very own Prince Charming isn’t too much to ask, is it? But what are two star-crossed lovers supposed to do when one kiss isn’t enough?

Love, Montana series
Book 1: Her Hero to Love
Book 2: Her Rogue to Tame
Book 3: Her Rebel to Kiss

Here’s a little excerpt for HER REBEL TO KISS. My hero, Justin, has just met an intriguing woman in red at a charity masked ball in Marietta, Montana (setting for my new series):

HER REBEL TO KISS Excerpt
Copyright © All Rights Reserved 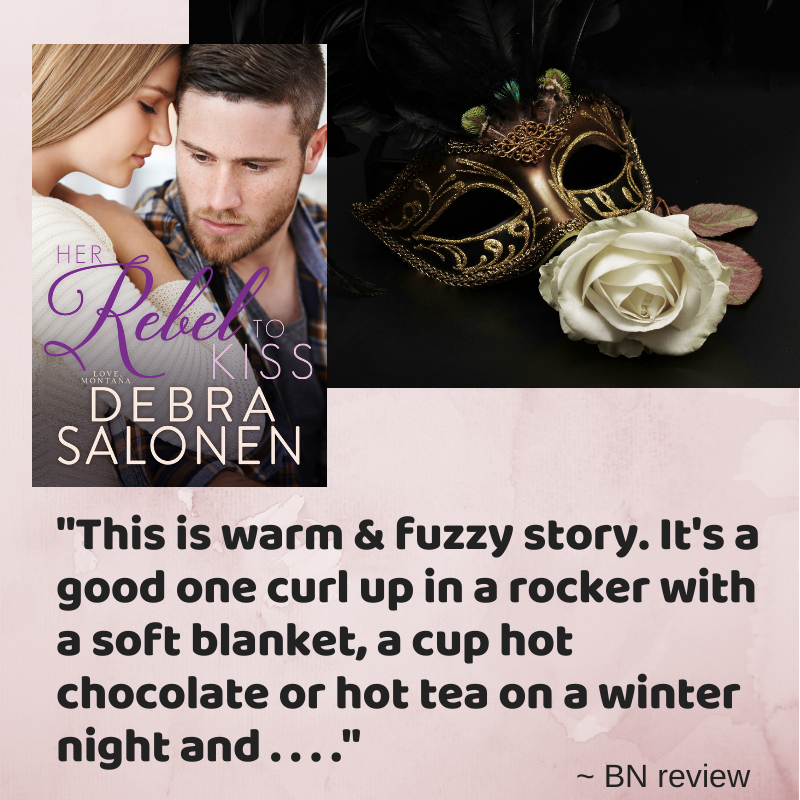 Purchase HER REBEL TO KISS here!

WOW! I was surprised to learn 98% of you planned to be awake at midnight. Although some said they’d be reading, not reveling. I was so humbled I decided to go to a party in the neighborhood. It was loud and fun. I was definitely awake. Thanks for peer pressuring me out of my winter hermit mode. 😉

My two randomly selected winners this week are:

(Mary and Gloria congrats. Please email me your pick of either a $5 Starbucks or a $5 Amazon gift card.)

This week’s Q&A: Resolutions: Yes or No?

I’m a rock solid no. Luckily, I’m usually so “over” the holidays with all the rich food and candy that January just naturally feels like a fresh start with my usual eating and exercise habits kicking in.

(Two winners will be chosen by random drawing to receive either a $5 Starbucks gift card or a $5 Amazon gift card. Please reply the usual ways: email or on my DebraSalonenAuthor Facebook page.)

Next week: more Property Sisters “insider” news. I turned in my revisions over the holidays and guess what my editor said?

I don’t know about you, but I feel like a stroll down memory lane. This stroll happened to be inspired by a photo on Facebook. That happens, doesn’t? 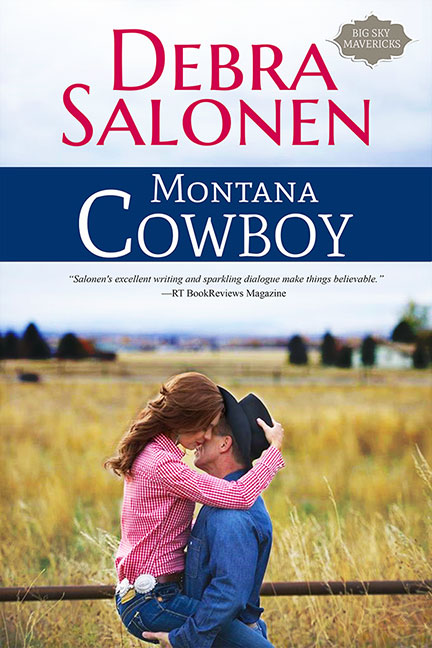 He’s got the ranch, the boots, the hat and even a few head of cattle, but everybody in Marietta, Montana, knows the former golden boy of Marietta High is a wealthy politician, not a cowboy. And even though that nasty scandal in Helena might have knocked him down a notch or two in the polls, what kind of a fool would trade access to the halls of power in Helena and a Harvard law degree for a ranch in western Montana? Possibly one whose new neighbor, Serena James–the woman the guys at Grey’s Saloon call “…the Red Hot Llama Mama”–makes him start to think about what he wants out of life, instead of what’s expected of him.

Serena James knows trouble when it hops her fence–

Moving to Montana and deleting her blog seemed like the perfect solution to her online stalker problem. Serena’s ready for a fresh start, but when her escrow on her ranch falls through, she has to scramble to find an immediate but temporary safe haven to rent for her herd of 50 alpacas, two llamas and one giant dog. Serena’s barely moved in when Austen Zabrinski–the man her landlord called “my absentee ranch owner brother who lives and works in Helena”–hops the fence in need of a lift. Even at first glance, Serena can tell he’s nobody cowboy, but who’s to say that isn’t a good thing? A little tryst with her gorgeous, sexy, here-today-gone-to-Helena-tomorrow neighbor might be the perfect welcome to Montana.

Since they’d practically had sex–in her mind–she decided to ask.

Once he was seated with his safety belt snug across his flat belly, she turned the key in the ignition and put the truck in gear.

“So, fill me in. You own a ranch your brother called a tax write-off. You’ve as much as admitted you’re nobody’s cowboy. You wear three-hundred-dollar jeans. I don’t see a wedding ring. Your nose is sunburned. So I take that to mean you don’t have a wife or live-in girlfriend to remind you to put on sunscreen.”

He let out a gruff cough. “Very observant. The jeans are two years old.”

“I don’t–didn’t–come to the ranch very often in the past.”

“No wife. Never married. My last…friend-with-benefits wanted more than I’m in a position to give at the moment. I’m not sure we’re still friends. But I’m positive the benefits have been canceled.”

She’d always been a sucker for smart men with a sense of humor. The leftover dewy feeling in her crotch–and the fact she was a stranger in a strange land–made her bold. “So, if someone new to the area was interested in that sort of position–friends-with-benefits-no-strings-attached–how would one apply? Online? Or in person?”

He tossed back his head and gave a deep, masculine laugh that sent a stream of shivers down her spine, pooling conveniently in her already primed lady parts. Her hands tightened on the steering wheel.

Since they’d reached the end of her driveway and had no traffic behind her, she threw the shifter into park and turned to face him.

Before she could offer any slightly embarrassed disclaimer for such an obvious come on, he released the latch on his safety belt and moved closer.

“In person. I go with my gut. Usually one kiss will do. Either there’s chemistry or there’s not.”

“Chemistry. Crap. My least favorite subject in school. But I do like kissing.”

She leaned in, too.

Austen could have come up with a dozen–make that a trillion–reasons not to kiss this beautiful stranger. But, for all his reputed logic and claims he was a rule maker, not a rule breaker, he was lonely. And…as much as it killed him to admit the fact, he’d reached a point where he was unsure of what to do next. Him. Rudderless. Now, living in the moment seemed like the only rational choice he had.

Besides…she offered. It wouldn’t be neighborly to turn her down. Right?

He caught her lips, which were softer than he’d imagined. A perfect match to his. Her eyes remained opened…for their initial contact, then her lids lowered in a sultry, utterly into it way that made him give a low, unplanned growl. What was it about that moment of surrender that brought out the beast in him?

When her perfect lips parted to invite him in, he closed his eyes, too. She tasted good. Mint gum? Maybe just leftover toothpaste. But there was sweetness, as well. A hint of honey. And he wanted more.

While his mouth plundered, his hands moved down her back to pull her closer.

He pulled back and looked down. “Oh. Duh.”

He stabbed the release button so she could slip free of it.

They stalled…for half a second before she grinned and plastered herself against him. “Um. You’re a good kisser. Very good. But I want you to be sure. No doubts.”

She wasn’t aggressive, just methodical. As if she were hitting all the bullet points in a textbook called Rules of Kissing. Austen could have stopped her at any point and said, “You’re hired.” But a part of him couldn’t wait to be taken to school.

She nibbled and teased. Her tongue engaged his in a clever, nonverbal debate. A first for him. Kissing had always been a mere step on the road to the big show. With Serena, a stranger, the playful exploration was fun.

Would? Hell, no. Will. What will sex with Serena be like?

He wrapped his arms around her possessively. He had to find out. Now. Right now.

Did that make you smile? It always does me. 😉 If you happened to miss this book, here are the links.

If you prefer to read in print form, you’ll find this book in the Big Sky Mavericks Collection, Book I – Family Matters. https://amzn.to/2NgopzG 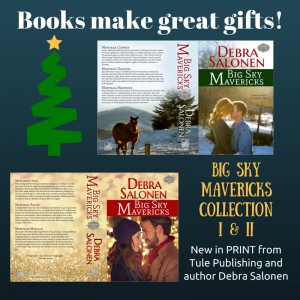 What is it about February?

First, we agree to let an overgrown squirrel predict the weather, then we blithely allow the flower industry, candy makers and greeting card people to run rampant over our hearts. 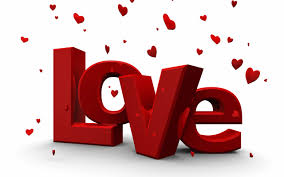 Speaking of hearts. Did you hear that the candy makers who supply the bulk of the world’s supply of that Valentine’s Day staple “Conversation Hearts” blew it? Whoever decided to sell the company to another company too inept to look at a calendar–V-Day is FEBRUARY 14th, people…well, not my problem. https://www.delish.com/food-news/a22577659/necco-candy-hearts-shut-down/

I bought early because some traditions–even the silly ones–must be adhered to. 😉

One GOOD thing to come out of this Valentine mayhem is celebrating Romance Novels. I mean, why wouldn’t we? Boy meets girl. They have issues. True love prevails. They live happily-ever-after. People who don’t read romance novels call that a formula. I call it magic. Reading can be magical. A good book can transport you out of a life that might be missing conversation–let alone conversation hearts–into a world of rich emotion, forgiveness, and joy. There may even be chocolate.

And here’s my Valentine to you: 50% off BOOKS II AND III of the Love, Montana series in the Tule Publishing BookStore, using the code: LOVE50 (copy this code then click the links below) 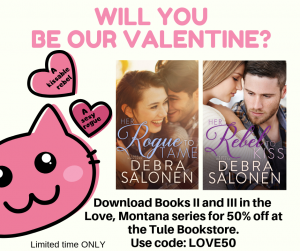 (The code is good for both titles: please share the love! Since Book I – HER HERO TO LOVE – is still FREE for one…more…day, that means you can read the entire series for less than a bag of Conversation Hearts. ;-)) 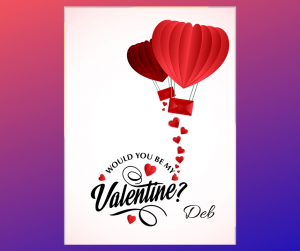 FREE for a short time! 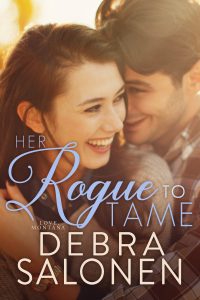