A new release is always fraught with worries and nervousness for me. What if I forgot to update the final version at ALL the vendors? What if something beyond my control goes wrong? What if readers hate it?

You’d think after doing this for 20 years, I’d be over the jitters, but no. It’s still a bit like sending your kid to Kindergarten for the first time. (Only I don’t have to worry about the biting.) 😉

Anyway, here’s the meme I created for this new release.

Here are two little snippets that a member of my review team enjoyed. I hope you do, too.

“The ceilings’ numerous recessed cans gave silvery highlights to his tousled waves. His casual polo shirt was a cool sage, almost the same color as his eyes. Sexy. Gorgeous. But it was the concern she read in his expression that really moved her. He cared. She sensed it, and that made him dangerous. She was a sucker for kindness.”

#2: (Kate’s four-year old daughter, Maya, finds fault with any man her mother shows an interest in. In our hero’s case, she takes exception to his shoes. She claims they squeak.)

“Sorry, Kate. I don’t know what’s wrong with me. I’m not usually this defensive about my shoes.” He glanced down at the demon cherub with the innocent smile. “But they don’t squeak. They cost an arm and a leg.”
“Then you’d only need one,” Maya said.

I hope you have a happy first weekend of August!

I’m playing catch-up. This week was busy prepping for my newsletter and getting my new release up for PreOrder. There are always so many loose ends to tuck into place before the links go live. Then, there’s the wait time while the vendors upload your book to make your links live!

But I think the drama was worth it. As I wrote in my newsletter, “As sometimes happens in the book publishing biz, your creative team disagrees about certain elements of production, and, although I’m the one who came up with the Princess Brides concept, my editor pointed out one small inconsistency: not every book ends with a wedding. In fact, the wedding above doesn’t take place until the last book of the series. Sooo…we’ve come up with a new flash, improved tagline, title tweaks and a new focus for the covers. I absolutely love what my cover designer, Rogenna Brewer, did with Book 1. I hope you like it, too.”

Is it me, or does my heroine look a bit like Meghan Markle?

Four sisters named after royalty, with dowries fit for a queen. Their Gypsy fortuneteller mother predicted each would marry a prince…of sorts.

She’s a princess with more to lose than her dowry.

Las Vegas restaurateur Grace Parlier doesn’t gamble, but she’s risking her dowry on a new business with her late father’s friend because casino owner Charles Harmon has what she wants: location, location, location. The money may have been earmarked for a wedding, but everyone knows Grace has terrible taste in men. Look at the way her heart races every time her family’s latest Romani rescue comes close. But how could an ex-con from Detroit possibly be the prince she was meant to marry?

He’s a Detroit cop with no skin in the game—or so he wants to believe.

Nick Lightner goes undercover in Vegas for one reason only: to take down scumbag Charles Harmon. Does he believe Lucky Chuck is a human serpent threatening his birth father’s family? Hell, no. Nick knows who he is and where his allegiance lies. Certainly not with a sexy “princess” who makes the few drops of Romani blood in his veins run hotter than a winning streak at the craps table. His heart maintains a safe distance…until the princess takes a bullet meant for him, then all bets are off.

PRINCE CHARMING UNDERCOVER is Book 1 in the Betting On Love series. If you’re a fan of romance with a side of suspense, you’ll love this action-packed story that introduces you to the kind of family Debra Salonen–winner of Romantic Times Reviewer’s Career Achievement “Series Storyteller of the Year” award in 2006–is known for. “Debra Salonen captures reader attention with multifaceted characters, layered conflict and fast pacing.”—Pamela Cohen, Romantic Times

Buy PRINCE CHARMING UNDERCOVER–the perfect “staycation.” Visit Las Vegas without leaving home. But remember, when your heart’s on the line, there’s no such thing as a safe bet.

The book won’t release wide for a whole month, but the way time is flying by, that will probably be tomorrow. 😉 But feel free to preorder here: PRINCE CHARMING UNDERCOVER or you can read the first chapter for free HERE.

Have a beautiful weekend!

It’s primary season in California. We have twenty-seven people running for governor. I need your vote, too, but I promise to keep this super simple! 😉

My upcoming GYPSY PRINCESS BRIDES series is set in Las Vegas and features four sisters of Romani descent. Their late father, Kingston “King” Parlier, named them after strong, beautiful, dynamic women—Princesses Alexandra, Katherine, Elizabeth and Grace (Kelly). Thanks to their Gypsy fortuneteller mother’s prophecies, they know they will marry a prince…of sorts. What Prince Charming these days doesn’t need a little work? (Okay, maybe Harry is a keeper just as he is, but he’s taken…or will be tomorrow.) 😉

First up is Grace’s story: PRINCE CHARMING UNDERCOVER. My amazing cover designer, Rogenna Brewer, outdid herself with three viable choices. I love them all and need help deciding which to pick. I have a contest that includes a $10 gift card prize to one winner happening on my newsletter that went out today.

To be part of the contest, click here: VOTE.

If you prefer not to sign up for my newsletter, but you still want to vote, I will tally your choice in with the rest. Here are your choices: 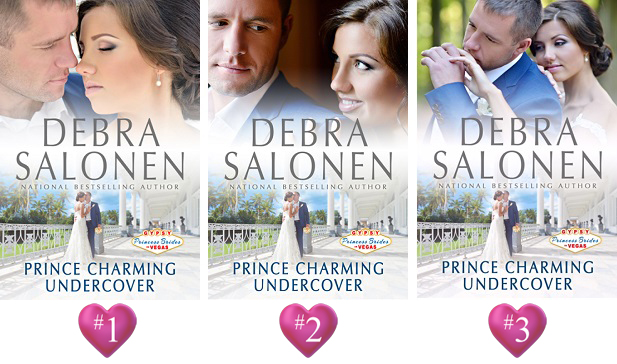 Please leave your vote in the comments below. Winning cover and contest winner announced as soon as Prince Charming Undercover goes up on preorder.

Have a great weekend and happy reading!